in the disciplic succession of the 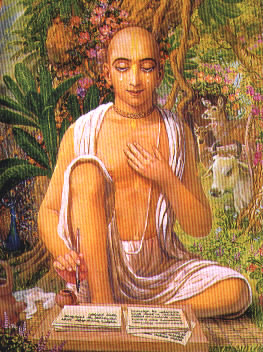 Baladeva Vidyabhusana's commentary is duly authorised by the auspices of the

All glories to Sri Govindaji !


Let my mind be eternally devoted to Sri Govindaji, the Supreme Lord Krishna , who is the source of all pleasures for the cows and the  senses. Who is the Ultimate Truth ! Who is infinite and who is an abode of inconceivable powers. Who is the indwelling monitor of every living entity as paramatma the supreme soul. Who is extremely competent in the protection of His devotees. Who is the ultimate source of all universes, material and spiritual and who is eternally blissful.


Srimad Bhagavad-Gita by which the ocean of ignorance becomes completely evaporated and by which pure devotion is nourished is the source from which the ultimate reality becomes illuminated eternally in spite of its inconceivability.

I am offering my humble obeisance unto that Gita Upanisad, the Srimad Bhagavad-Gita, which was composed by the Supreme Lord Krishna, Himself, who is the abode of all true virtues.


The Supreme Lord Krishna, who is the Supreme God of Gods, who is full of unfathomable, transcendental bliss, who is inconceivably omnipotent, the Supreme Ultimate Personality, counselled Arjuna on the battlefield of Kuruksetra.


The Supreme Lord Krishna by whose will the complete creation, preservation and annihilation of a myriad of variegated universes are subject to. Whose lotus feet are incessantly meditated upon by Brahma, Shiva and all the demigods.


That Sri Hari, the Supreme Lord Krishna who removes all sufferings of His devotees, after pleasing His own associates by His pastimes, who had descended with Him right from the very beginning of His appearance; and after delivering the living entities caught by the tigress of ignorance. The Supreme Lord Krishna desiring the salvation of posterity and future generations even after the disappearance of His manifest pastimes, bestowed upon the earth Srimad Bhagavad-Gita.


Although Arjuna was His dear associate, by His inconceivable potency He made him appear bewildered and then again to dispel his bewilderment, He narrated Srimad Bhagavad-Gita which illuminates the Ultimate Truth regarding Himself, His eternal associates and His eternal abode.


In the Gita Upanisad known as Srimad Bhagavad-Gita five main topics are described:

5) karma... the results of actions


Among these five the only one among them who is all pervading and omniscient is Isvara, the Supreme Lord and the one who is incomplete in knowledge is the known as jiva, all living entities.


Among these five, Isvara, jiva, prakriti and kala are eternal and the four being jiva, prakriti, kala and karma are all subject to Isvara. Karma, the results of actions is described as pragathava which has no beginning but does have an end. An example of pragathava is: summer is coming but from where summer has come from cannot be ascertained; but it can be determined when summer is over and has ended. Karma is to be understood like that.


Isvara and jiva are both the knowers and the enjoyers. This is verified by Vedanta and the sagacious conclusions of the learned. Though knowledge and the knower are non-different like the sun and its rays yet there is a difference due to special attributes. The special attribute likened to difference is not actually different and although there is no essential difference the function of difference is utilised to discern dharmi the subject from dharma the object. Like the difference between fire and fires power of combustion. When it is said that time is always present, it is apparent that there is no difference between time and always; yet they are used together anyway. So in this way the wise realise difference in spite of apparent non-difference.


The means of attaining paramatma who is the Ultimate Consciousness and indwelling monitor of every living entity are threefold: By karma, jnana and bhakti. Karma is described as included within the successive order of the means only when all sense of proprietorship conceptions of I and mine and all desires for the results of ones actions as described in the Vedas are completely renounced; by this the individual consciousness is sufficiently purified to qualify for jnana and bhakti.


Karma as verified in the Vedas are primarily those actions without any violence. Karma activated due to violence is considered secondary because activities of this nature have no connection whatsoever to the means of attaining the Ultimate Consciousness who is paramatma and takes one far, far away from any oppurtunity for the means of attaining any communion with Him and receiving salvation. Whereas jnana and bhakti are directly connected to the means of salvation.


Now the question arises that if by performing karma  as described in the Vedic scriptures, the consciousness becomes purified and the knowledge of the Ultimate Truth begins to dawn and salvation is attained. Then what is the necessity of bhakti. The answer is when that very knowledge is enhanced with some special quality it is called bhakti. The difference between jnana and bhakti are like a winkless gaze and a side long glance.


The jnanis enquire after the transcendental manifestation by which the five types of liberation are gained. Whereas bhakti enquires about the variegated pastimes of the transcendental manifestation who is the Supreme Lord Krishna and His Vedically authorised incarnations and expansions, by which the bliss of His direct service is the highest objective that automatically includes all that liberation has to offer.


Bhakti is often found to be associated with sravanam,  which is hearing and others and also with bhava which is transcendental ecstasy and others as well. It should be clearly understood that the hearing referred to herein is hearing Hari katha which is topics about the Supreme Lord Krishna and His phenomenal pastimes. Now if bhakti is an enhanced form of jnana then how can hearing about the Supreme Lord be considered the practice of jnana. Like a locket of hair from the Supreme Lord Krishna represents transcendental bliss; similarly as Hari katha or relishing the topics and pastimes of Lord Krishna fully represents the most complete bliss of jnana.


In the middle section, bhakti which manifests itself from knowledge of the unlimited glories of the Supreme Lord Krishna is described as the means of attaining Him, the highest objective.


In the final section the identity of isvara, jiva and prakriti which Lord Krishna mentioned earlier are described in full.


Those by qualification who are entitled entry to Srimad Bhagavad-Gita are of three categories:

2) sa-dharma nishta...those who are righteous and sincere in performing their scriptural duties

3) vigitendriya...those who are of controlled senses


Furthermore there are three types of living entities within the aforementioned categories. The first two are performed by householders and the third is performed by one who is in renunciation.

2) pari nistha...those who are devoted to the Supreme Lord Krishna performing devotional service out of love for Him in order to inspire and demonstrate to the common man the glories of bhakti yoga

3) nirapakya...those who have completely purified their consciousness by consistently chanting the holy names of the Supreme Lord Krishna and by constantly meditating on His form and His pastimes. Engaged 100 per cent in His transcendental, devotional service, exclusively; totally renounced internally from all material conceptions and completely free from all material designations.


In Srimad Bhagavad-Gita the words Brahman which is the spiritual substratum pervading all existence indicates the Ultimate Truth and aksar which  means imperishable refer also to: isvara the Supreme Lord, jiva-atma the self realized soul and prakriti the material substratum. The word ksar meaning perishable refers to the conditioned souls and the physical body.


The word prakriti material substratum also refers to the three modes being: sattva goodness, rajas passion and tamas ignorance; desires, ones own individual nature and ones eternal spiritual identity.


The word yoga which is the science of the individual consciousness attaining communion with the Ultimate Consciousness refers to karma reactions, bhakti devotional service, jnana knowledge and citta vritti-nirodha which is complete control of all mental faculties.


Srimad Bhagavad-Gita contains the revelatory words of the Supreme Lord, Himself. Thus it is the best of all scriptures. What is the necessity of other elaborate scriptures if they are not used in conjunction with Srimad Bhagavad-Gita which emanated directly from the mouth of Lord Krishna.