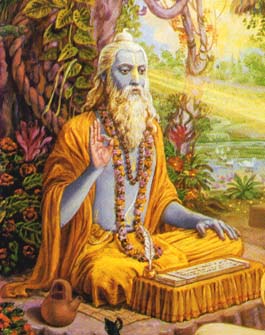 Showing great compassion for all living entities Lord Krishna’s lila avatar and literary incarnation Krishna Dvaipayana Vedavyasa composed the authentic historical treatise known throughout creation as the Mahabharata. The eighteen chapters of the Bhagavad-Gita are found in the Bhisma-parva, chapters 25 to 42 of the Mahabharata and they are the exact words that Lord Krishna spoke in Sanskrit on the battlefield of Kuruksetra, India over five thousand years ago in 3137 B.C. The proof that the Mahabharata is definitely an authentic historical treatise and not allegorical or mythological is verified in the Srimad Bhagavatam, Canto 1, chapter 4, verse 25 as follows.

Out of compassion the great sage Vedavyasa thought it wise that all mankind achieve the ultimate goal of life. Thus he compiled the historical treatise known as the Mahabharata for the women, laborers and friends of the brahmanas.

The external reason chosen by Vedavyasa was to make easily available for all humanity through dramatic narration a simple but sublime way to understand the path of righteousness. This is corroborated in Srimad Bhagavatam, Canto 1, chapter 4, verse 29:

Vedavyasa compiled the Mahabharata under the auspices of disciplic succession, properly explaining what is essential so that even women, laborers and those not qualified to read the Vedas can envision the path of righteousness.

Although Vedavyasa was an incarnation of Lord Krishna Himself he was also within the purview of disciplic succession having been initiated by Narada Muni who was initiated by Brahma who was initiated by Vishnu. After writing the four Vedas, the 108 Puranas and the Brahma Sutras, Vedavyasa composed the Mahabharata for the benefit of the common man. But the internal purpose and ultimate reason for doing so was to guide the attention to Lord Krishna. In Srimad Bhagavatam, Canto 3, chapter 5, verse 12 this is fully substantiated:

Your friend Vedavyasa has already described the sublime transcendental qualities of the Supreme Lord Krishna in his epic narrative Mahabharata. But the real purpose was to draw the attention of worldly people away from mundane topics and direct it towards the divine revelation of Bhagavad-Gita spoken by Lord Krishna.

In the beginning of Treta yuga the supreme science of Bhagavad-Gita was delivered by the sun-god Vivasvan to Vaivasvata Manu the father of mankind who gave it to his son King Iksvaku the ruler of the planet Earth.

Lord Krishna Himself also confirms this exact same disciplic succession in the transferal of the supreme science in the Bhagavad-Gita, chapter 4, verse 1:

The Supreme Lord Krishna said: I instructed this supreme imperishable science unto the sun-god Vivasvan and he instructed it unto Vaivasvata Manu the father of mankind who instructed it to his son King Iksvaku, ruler of all the Earth.

King Iksvaku was the sovereign ruler of Earth at the time he received the supreme science of the Bhagavad-Gita. He was the progenitor of the solar Raghu dynasty in which the Lord Krishna's avatar as Rama appeared in Ayodhya also in Treta yuga. If we calculate we know that the present age we are in is Kali yuga in which 5000 years have transpired. Before this was Dvapara yuga which had 800,000 years and before this was Treta-yuga which began 1,200,000 before Dvapara-yuga. So from this Vedic information it can be determined that King Iksvaku received the Bhagavad-Gita in this world at the very least 2 million years ago.

Going even further, the lifespan of Vaivasvatu Manu who is the current and seventh Manu in this kalpa is calculated in the Vedic scriptures as being 308,571,428 solar years of which 120,400,000 have transpired. Since the Bhagavad-Gita was given to the sun-god Visvasvan before the current Vaisvasvatu Manu was born then it can be understood that the Bhagavad-Gita was spoken to him at least 120 million 400 thousands years ago.

Going even more further than this we know that one kalpa is calculated in Vedic scriptures as being 4 billion 300 million years. There are 14 Manus is this time period of a kalpa of which our current Vaivasvatu is the seventh Manu. So there were six previous Manus before him and they also received the supreme eternal science known as Bhagavad-Gita. So if we multiply 6 times 308,571,428 which is the time of existence for one Manu we arrive at the time span of 1,851,428,568 solar years and if we add the 120,400,000 years from our current Vaisvasvatu the seventh Manu. It can be determined the Bhagavad-Gita was also spoken 1 billion, 971 million, 828 thousand 568 years ago.

This supreme science of the Bhagavad-Gita which the Supreme Lord Krishna gave to the sun-god is in our current time span of the seventh Manu. This is all under the duration of Brahma created from a lotus sprung from the navel of Vishnu. That Brahma was created from a lotus is confirmed in the Brahma Samhita, chapter 5, verse 22:

The divine lotus which sprung from the navel of Vishnu is in every way related to the spiritual communion of all souls in existence and is the origin of the four-faced Brahma versed in the four Vedas.

So this is the Vedic information regarding the chronology of the 18 chapters of the supreme science known as Srimad Bhagavad-Gita that was revealed by Lord Krishna to Arjuna amidst the 7 divisions of the Pandava army and the 11 divisions of the Kaurava army just prior to the 18 day battle of Kuruksetra in 3137 B.C. This all transpired during the present life of our current Brahma whose origin was the divine lotus manifested from the navel of Vishnu.

The Vedic scriptures confirm that creation is cyclic and lasts for a lifetime of Brahma. These calculations are measured by a system known as kalaganana which is determined by the astronomical calibrations and movements of celestial stars and planetary bodies in interlocking galaxies and universes. One day and one night of Brahma is 8 billion 640 million Earth years. One year of Brahma is 360 days of Brahma equaling 3 trillion, 110 billion and 400 million Earth years. One lifetime of Brahma is 100 of these years of Brahma equating to 311 trillion and 40 billion years.

Further information of the revelation of the existence of Srimad Bhagavad-Gita shall establish the chronology of six Brahmas previous to our present Brahma’s lotus birth from Vishnu as verified below in Mahabharata, Santi-parva, CCCXLIX.

In Brahma's birth 311 trillion and 40 billion years previous to the birth of our present day Brahmas manifestation from the divine lotus from Vishnu, Brahma was manifest from a golden egg from Vishnu. When the golden egg cracked Brahma emerged and Vishnu communicated the supreme science of the Bhagavad-Gita to him. Brahma then delivered it to those holy sages known as the Varhishhadas who in turn gave it to a brahmana named Jeshthya well versed in the Sama Veda. The brahmana Jeshthya instructed a king named Avikampana. After this knowledge of the supreme science of the Bhagavad-Gita disappeared from this world.

In Brahma's birth 622 trillion and 80 billion years previous to the birth of our present day Brahma and before the Brahma manifesting from the golden egg from Vishnu, Brahma then appeared from the nostril of Vishnu. At that time Vishnu himself sang the supreme science known as the Bhagavad-Gita in his presence. Then a fiat of Brahma born from his will named Sanat Kumara studied it thoroughly and instructed it to Prajapati Virana who after studying it taught it to the ascetic Raivya who imparted it to his son of pure soul and firm vows and great intelligence. After this knowledge of the supreme science of the Bhagavad-Gita disappeared from this world.

In Brahma's birth 1355 trillion and 200 billion years previous to the birth of our present day Brahma and before the Brahma manifesting from Vishnu's speech, Brahma then appeared from the eyes of Vishnu. At that time Brahma learned the supreme science of the Bhagavad-Gita from Soma the moon god. Having received it Brahma then imparted this supreme science to Shiva who subsequently communicated it to all those rishis who are known by the name of Valikhilyas. After this knowledge of the supreme science of Bhagavad-Gita disappeared from this world.

In Brahma's birth 1666 trillion and 240 billion years previous to the birth of our present day Brahma and before the Brahma manifesting from Vishnu's eyes, Brahma then appeared from the mind of Vishnu. Those rishis that subsist only upon the froth of water obtained the supreme science of the Bhagavad-Gita from Vishnu. These same rishis then gave it to those rishis who are known as Vaikanasas and from them Soma the moon-god received it. After this knowledge of the supreme science of the Bhagavad-Gita disappeared from this world.

This Vishnu is one of three Vishnus and is known as Garbodaksayi Vishnu who is one of three Purusa avatars, which are one of the six groups of incarnations of the Supreme Lord Krishna. This is confirmed in the sublime and authoritative biography Sri Caitanya Caritamrita by Krishna das Kaviraj in Madhya Lila, chapter 22, verse 38.

Lord Krishna again revealed the supreme science of the Bhagavad-Gita which had disappeared from this world as is confirmed in Bhagavad-Gita, chapter 4, verse 2 below:

The supreme science of the Bhagavad-Gita was thus received through the auspices of disciplic succession and the saintly kings received it in this way. But due to the passage of time this knowledge has been almost lost.

Thus has been given an authorized account of the chronological history of the supreme science known throughout all of creation as Srimad Bhagavad-Gita, according to Vedic scriptures compiled by Krishna Dvaipayana Vedavyasa, the son of Parasara from the womb of Satyavati. May all beings in all the worlds be benefited by this supreme science.